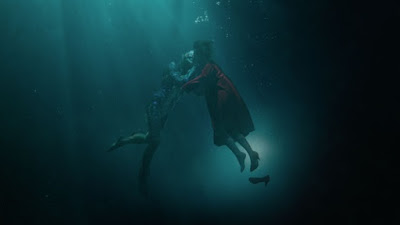 The 2018 Oscar nominations were just announced this morning, and as usual, I have some thoughts. (THE SHAPE WATER got 13 nominations?!) I'll go over the major categories and list what I expect will win (what the Academy will pick), should win (what I would pick), WTF is it doing here (how did this get nominated), and snubs (why didn't this get nominated).

will win:  It's pretty difficult to predict what will win here. Most of these have a solid chance, except for DARKEST HOUR. I'll go with DUNKIRK, which I think has the best chance due to its universal appeal and also having Nolan nominated for Best Director.

WTF is it doing here:  DARKEST HOUR, which doesn't really have anything going for it except for Gary Oldman's performance.

snubbed:  BLADE RUNNER 2049 and mother! The former was a box office flop and the latter was a polarizing movie to say the least, even for critics. But they were #1 and #2 on my list, respectively.

WTF is he doing here:  Paul Thomas Anderson, but only because I have not seen PHANTOM THREAD yet. I'm pretty sure he deserves to be nominated.

snubbed:  Denis Villeneuve for BLADE RUNNER 2049. He made a sequel to a 35 year old film that improved on the original while staying true to its themes and visuals. I don't think even Ridley Scott could have accomplished that.


will win:  Toss up between Frances McDormand and Saoirse Ronan, although I think the critical backlash against THREE BILLBOARDS may help Ronan's chances here.

WTF is she doing here:  Meryl Streep, who I'm tired of seeing nominated every single year. Yeah she's great, but she gets nominated for every damn film she's in, whether they're good or not.

snubbed:  Jennifer Lawrence for mother!, who is actually nominated for a Razzie instead. That's ridiculous.


will win:  Gary Oldman, for the standard Oscar-bait role.

should win:  Timothée Chalamet. I'm not the biggest fan of his movie, but he definitely stood out with his performance.

WTF is he doing here:  Denzel Washington. No one saw his movie. Number of those that actually did were offended by his performance of a character on the spectrum.

snubbed:  James Franco (THE DISASTER ARTIST), who was probably hurt by the recent allegations of sexual misconduct.


will win:  Not really sure, but Allison Janney did win the Golden Globe.

WTF is she doing here:  Speaking of which, Octavia Spencer. This one is truly a WTF because I thought her character was borderline offensive as a typical black friend to the main protagonist.

should win:  Roger Deakins. The Academy loves to nominate him but has never actually given him an Oscar. He did phenomenal work on BLADE RUNNER 2049.

WTF is he doing here:  Sorry Bruno Delbonnel, I haven't seen your film.

snubbed:  Sayombhu Mukdeeprom (CALL ME BY YOUR NAME)

will win:  Aaron Sorkin is the big name here.

should win:  No clue.

WTF is it doing here:  Look, I saw LOGAN. I liked LOGAN. It doesn't deserve an Oscar for anything.

snubbed:  Can't think of anything.


will win:  I can't decide between Jordan Peele, Greta Gerwig, and Martin McDonagh. Typically, the Academy likes to award this to the movie that gets nominated for other categories but doesn't win them. Movies like MANCHESTER BY THE SEA, DJANGO UNCHAINED, HER, you get the picture. So it will depend on how these nominees do in the other categories that night, but my guts say Jordan Peele will get the Oscar here, while losing the other ones like Best Picture and Best Director.

should win:  Jordan Peele. I need to watch GET OUT again, but I remember being super impressed with the writing -- all the subtle clues and callbacks that payoff later in the film.

WTF is it doing here:  Surprisingly none.


will win:  COCO. Pixar is always the safe bet.

WTF is it doing here:  THE BOSS BABY

snubbed:  A SILENT VOICE, the anime film about a deaf student and the bully that torments her. It didn't quite make my top 20, but it was close.


will win:  The Academy usually goes for the safe, audience-friendly pick. That would be "Remember Me."

should win:  "Mystery of Love" so that Sufjan Stevens can be called an Oscar winner. The song is pretty great too.

WTF is it doing here:  "Stand Up For Something." Sorry, I don't remember what MARSHALL is.

snubbed:  "Visions of Gideon" from CALL ME BY YOUR NAME, which I prefer over "Mystery of Love" and I think is used very effectively at the end of the film.
at January 23, 2018