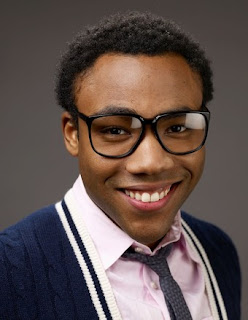 I'm apparently a working man now, which would explain why there hasn't been a new post since March. (The fact that I didn't have anything to write about isn't important.) So what urgent news brought me out of my two-month-hiatus? The oil spill in the Gulf of Mexico? The giant sinkhole in Guatemala? Legendary college basketball coach John Wooden's passing? The Lakers' dominant win over the Celtics in game 1 of the NBA Finals?

How about Donald Glover campaigning for the role of SPIDER-MAN?

If you don't know who Donald Glover is, you're obviously not a fan of COMMUNITY. And you probably haven't seen or even heard of the comedy gem that is MYSTERY TEAM. That's okay. No one's perfect.

The news of Glover wanting to audition for the role of Peter Parker is a hot topic among film geeks right now. Why? Well, the issue isn't the fact that Glover is not that well known. COMMUNITY is a great show, but it doesn't have the big audience that it deserves. MYSTERY TEAM never played in more than 4 screens in the theaters. You read that right. That's a single 4. But you know what, Tobey wasn't a big star either when he was cast in the first SPIDER-MAN.

No, the issue is, as you can see by the picture above, Glover's skin color. Aren't we past this by now? This shit was old when Michael Clarke Duncan played the Kingpin in 2003's DAREDEVIL. Is there a rule that superheroes have to be white? (Except when they're supposed to be black, like BLADE?) Why can't Peter Parker be black? Would his story change in any way because of his skin color? He's supposed to be from Queens, NY. Has anyone seen the demographics of Queens? Is it because you'd have to change other characters like Mary Jane into black characters? She can stay white, ya know. Interracial relationships do exist, believe it or not. And before you say it: there are plenty of black nerds out there.

And all of this wouldn't even matter when he's SPIDER-MAN, because he wears a friggin' mask.

Look, I'm not saying Peter Parker has to be black. He could be white or brown or pink, as long as you find the right actor for the role. All I'm saying is, don't just dismiss a talented guy like Donald Glover because of his skin color. Let the guy try out, for Peter Parker's sake.

Although, now that I think more about this race thing... hmm... hear me out here:

Peter Parker is a science nerd. He's raised by older relatives. His uncle gets killed in a robbery. He gets beat up by jocks. He's always late.

Peter Parker is Asian. All you would have to do is drop the last two letters from his name.
at June 05, 2010 2 comments: