We spent the better part of the day on South Congress, south of downtown, littered with vintage shops, restaurants, and food stands. 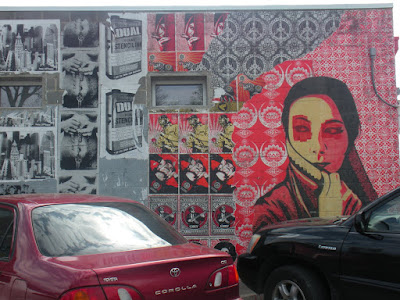 Our first screening for the day at was 9:30PM, which was for the world premiere of...

synopsis: Only one American hero has earned the rank of Green Beret, Navy SEAL and Army Ranger. Just one operative has been awarded 16 Purple Hearts, 3 Congressional Medals of Honor and 7 Presidential Medals of Bravery. And only one guy is man enough to still sport a mullet.

mini-review: I'm gonna come out and say I'm a big fan of the MacGruber skits on SNL. Yeah, they're two decades late on parodying MacGyver. I don't care. Will Forte makes me laugh every single time he plays the character. He knows how to sell it. That said, my expectations weren't very high for the movie. Let's face the facts, movies based on SNL skits haven't fared too well since WAYNE'S WORLD. But the combination of Forte, Jorma Taccone's direction, a solid supporting cast (Kristen Wiig, Val Kilmer, Ryan Phillipe) and a heaping dose of lunacy and vulgarity aid in making the movie a lot better than it should have been. Or maybe I'm just biased.

We couldn't stay for the Q&A because we had to run to Alamo Ritz to stand in line for...

synopsis: Oscar and his sister Linda are recent arrivals in Tokyo. Oscar's a small-time drug dealer and Linda works as a nightclub stripper. One night, Oscar is caught up in a police bust and shot. As he lies dying, his spirit, faithful to the promise he made his sister that he would never abandon her, refuses to leave the world of the living. It wanders through the city, his visions growing evermore distorted, evermore nightmarish. Past, present and future merge in a hallucinatory maelstrom.

mini-review: HOLY. SHIT. Best movie of the festival. Notice I didn't say "favorite," but "best." This isn't a "fun" movie. You will not be entertained. It will test your patience and endurance. You will be appalled at the amount of nudity and graphic sex scenes. You will say "what the fuck just happened" after it ends. You will probably hate this movie, like Dij did. That's too bad.