We were pretty tired from getting in late the previous night, so instead of going to a panel called

A Conversation with Michel Gondry,

we slept in. Regrettable, but we couldn't help it.

We had some time before the first movie screening, so we decided to eat at Frank, a place famous for their hot dogs. Unfortunately, this was a Sunday, and they only serve brunch on Sundays. So no wieners. Still, the food was good. I had chicken and waffles and Dij had the equivalent of a Denny's Grand Slam breakfast. Oh, and there was a DJ playing music near our table. 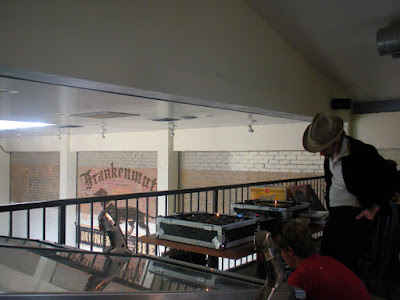 After that, it was time for...

synopsis: When a Pakistani-Muslim engineering student moves into a house with punk Muslims of all stripes in Buffalo, New York, his ideologies are challenged to the core.

mini review: Muslim punks. Yeah, you read that right. It's an interesting subject, and the movie handled it quite well. I was a little lost on all the non-English words (I want to say "Muslim" words, but I thought that might be offensive... I dunno) that were thrown about by the characters, though. I did like its message of challenging your faith and ideologies, and that's something we can all adhere to, no matter what religion we fall into. Solid flick, but I don't see it getting a wide release in theaters. 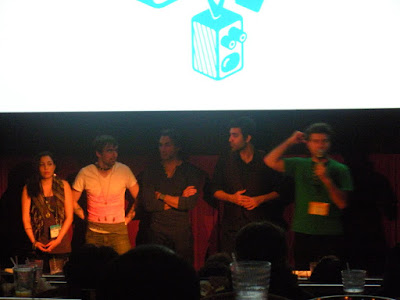 (There's wasn't anything too interesting at the Q&A.)

Then we headed over to Lamar for the screening of...

synopsis: Erica spends her nights trawling that bars and beds of Austin. Emotionally withdrawn, sleeping with multiple men is just what she does... until she meets the older and mysterious Nate, who claims to have an "honorable discharge" from Iraq. Despite his air of danger, Nate's the only guy who doesn't just seem to want to get her into bed, and the two form a hesitant bond. But one of Erica's casual sexual encounters, Franki -- a young, hot-headed wannabe rock star trying to make it big -- is about to return dramatically into her life...

mini-review: Very, very dark. (And still not the darkest movie we saw at the festival... that would come on day 4.) It starts and ends exactly at the right places, and doesn't waste a single scene. And it gives you just enough information about the three main characters -- not too much, not too little -- that's perfect for the story it's telling. And the ending is more than a little heartbreaking. This movie reminded me a lot of SYMPATHY FOR MR. VENGEANCE, in its tone and characters. Make of that what you will. 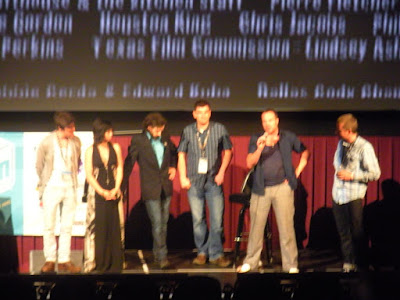 things learned at the Q&A:
I'm not writing anything about the story, because it's better to know little as possible before seeing the movie, if you're able to. Dij wasn't a fan. She was actually a little shookup after the movie, so instead of going to the screening of SERBIAN FILM (another really dark movie, supposedly) like we had planned, we called it a night.
at March 19, 2010