"Rise from your grave!"

I've been meaning to resurrect this puppy for several months now, yet I had no work to show for it. Until now, bitches.

"Oh how clever. He complains about Youtube clips then immediately posts another one." You think that's clever? It's called "he's out of ideas."
Wait, where was I? I really need to get this ADD thing sorted out. If I would just remember to write this down or get it tattooed to remind my... OOH LOOK A KITTEH! 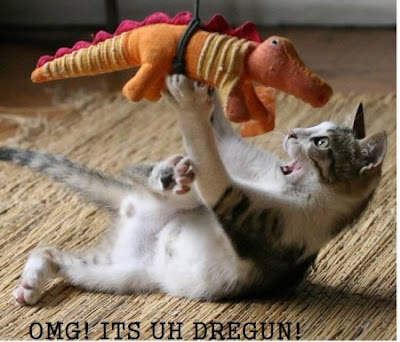 To quote Andy's future wife (sorry Sharon): "Oops I did it again."

I'm really getting sidetracked here. What the hell was I going to write about? Think, dammit. Stop getting high off dried mangoes (ZOMG DELISH) and think!

How can I ever write a screenplay when I can't even write a single coherent post on my pathetic blog?

My all-sugar diet isn't going so well. It's going straight to my medulla oblongata.

(fell asleep going through old posts; I think I got to October of 2008 before my eyelids gave up)

marriage: Got tied to ball and chains back in August. Sorry, ladies. Actually, I think the guys were more upset. Pictures are up on Facebook because putting them on here is just redundant hard redundant.

job: My hours at HP (which were already low to begin with) got severely cut sometime in the summer due to number of reasons. Coincidentally, they all sound like "recession." I've been looking for another job, but in case you haven't heard - "recession." So I've decided to study and get myself certified by Microsoft (MCDST) so my resume would look a little less crappy.

school: Because the wedding was so close to the start of the fall semester, I missed the first week of school, and wasn't able to add the classes I wanted. So in bitter defeat, I've been playing WoW I've decided to study and get myself certified by Microsoft (MCDST) so my resume would look a little less crappy. Whoa, was that a glitch in the matrix?

church: Roy is leaving because ha hates us. Can't really blame him. Not everyone appreciates BATTLESTAR GALACTICA like he does. (except me) All joshing aside, I appreciate everything he's done for our EM and wish him luck in grad school and his future endeavors. I hope the new pastor isn't a cylon.

fantasy basketball: New season is about to begin pretty soon, and we just had our rookie/trash draft last night. I didn't pick up anyone I really wanted, and my team is still looking mildly horrendous. As long as I can beat David, I won't cry myself to sleep.