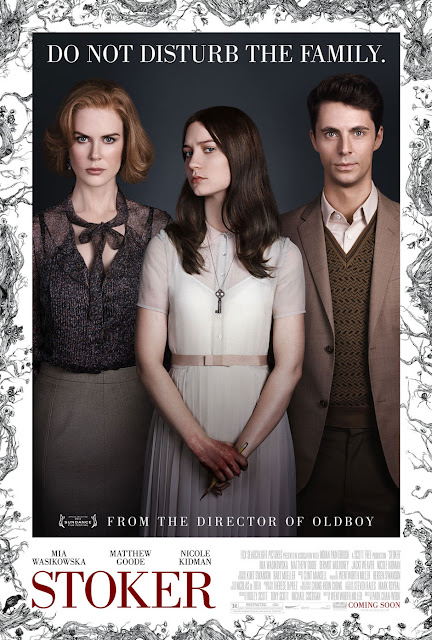 I have a confession. I love the look on people's faces when they ask me what my favorite movie is and I tell them it's OLDBOY. Most of the times, they look confused since they don't know what it is. But if they do know, they get this particular look of revulsion combined with eyes that scream "what the hell is wrong with you?!" If you've seen the movie, you know why. So I understand why they make the face. Yet it still makes me laugh (inside).

Park Chanwook, the director of OLDBOY, finally crossed over and made an American film. And not just any film, a Hitchcockian film. Coming over to the states and working under an American studio has not lessened Park's stylistic flourishes -- the film is is gorgeously shot and meticulously edited, the production design is superb, and the actors are across-the-board great. There's uneasiness and palpable tension to the overall mood and setting even when a character is doing a mundane task, such as walking up a flight of stairs.

Park is a master filmmaker, and working in a foreign language didn't diminish that one bit. The movie wasn't shown wide, so naturally it didn't make much money. Hopefully it finds a bigger audience on home video so Park can continue making films like this, because frankly, no one else is doing it.