My previous attempts at resurrecting this blog have been EPIC FAILS as the kids say on the internets and the IRLs. Yet like Jason Voorhees, I keep coming back to my Crystal Lake hoping that this time, the damn kids would just leave me alone so I can murder them in their sleep. I'm sorry, that was a horrible metaphor. It didn't even make sense.

So the gist of this is that, in order to keep this blog going regularly, I'm giving myself a writing assignment. And what better to write about than the subject dear to my heart (and loins)?

I'm gonna try to write mini-reviews for every movie I see, as long as it's my first time seeing it. Why a mini-review? Because it sounds more manageable. I'm all about lowering expectations, you see.

Now on to the first movie. 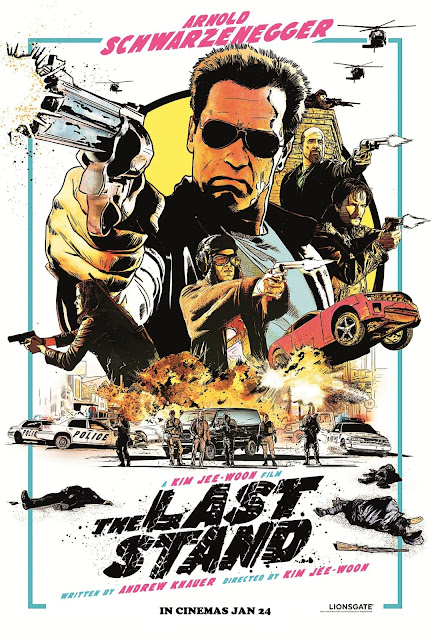 Now is the perfect time for Hollywood to make an UNFORGIVEN-like commentary on old action films and its stars, since those guys are old enough to be grandfathers. Unfortunately, all we've seen so far are 60 year old white guys running around like indestructible superheroes. Sly with THE EXPENDABLES. Bruce with another DIE HARD.  The endless UNIVERSAL SOLDIER franchise with JCVD. It was cute at first, but this is getting out of hand. How can John McClane survive this in his age when he could barely walk by the end of the first movie, which was 25 years ago?

Arnold has been away from the big screen for 10 years, keeping himself busy by ruining running California as the Governator. Sadly, his first movie (in a starring role) in a decade isn't much to speak about. This is Kim Jee-Woon's (I SAW THE DEVIL, A BITTERSWEET LIFE) stateside debut, so it naturally has some of his trademark visual flair and flourishes. But even he can't overcome the C-level screenplay, filled with cardboard-thin characters, stale dialogue, and predictable storybeats. Luis Guzman: wasted. Johnny Knoxville: unfunny comic relief. Forest Whitaker: slumming. There's nothing that stands out or is memorable here other than a car chase through a cornfield, which was visually stunning. Seriously, that scene belongs in another film.

Kim Jee-Woon deserved better than being stuck with this. Let's hope the other two Korean directors fare a little better in their American debuts -- Park Chan-Wook with STOKER, and Bong Joon-Ho with SNOWPIERCER. And you too, Arnold.