I just can't seem to get these lists done in time -- you know, at the end of the year when these are actually relevant. It's the same old excuses:  I'm busy (not really). I have more important things to do (yeah right). I'm lazy (that's a bingo). If you've been paying attention, I usually do my music list first, followed by the movie list. Sadly, not this year. I've come to accept the fact that it just takes way too much time and energy to try to be a hipster, and I don't listen to new music anymore. I still have a Spotify account but I use it more as a CD replacement in my car to listen to old favorites. Perhaps I'll start listening to the radio again? Kill me now.

What does that have to do with movies? I dunno. I feel like the toughest part of doing these lists is actually starting them. I guess I wanted to start off by cycling through my excuses for why this list is going up in February, and why there's no music list.

My List of Shame (movies I missed):  AMOUR, BEASTS OF THE SOUTHERN WILD, THE IMPOSSIBLE, LINCOLN, THE PERKS OF BEING A WALLFLOWER, RUST AND BONE, SAFETY NOT GUARANTEED, SOUND OF MY VOICE 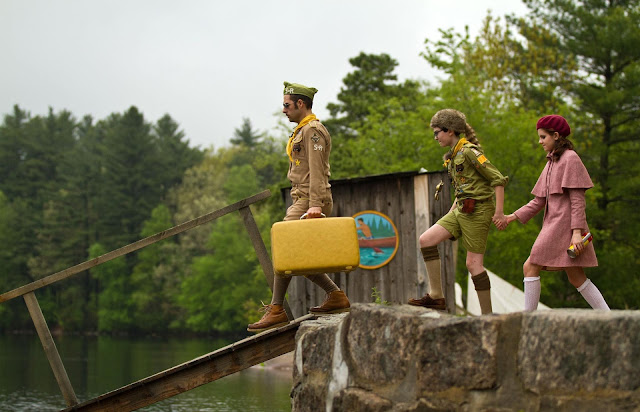 "I love you, but you don't know what you're talking about."

If there's any one filmmaker that makes the Mrs. squeal with joy, it's Wes Anderson. She loves his style -- the cinematography, the production design, his use of music, the deadpan characters with dry wit, the list goes on. MOONRISE KINGDOM is a childhood love story told in a way only Wes Anderson can, employing all his aesthetic eccentricities to make it funny, sweet, and entertaining the whole way through. Yeah, I'm pretty keen on him as well.

2012 Trend-Watching:  Great performance from an actor prone to phoning it in (Bruce Willis). Kids getting violent. Gorgeous visuals. Look at all these actors! 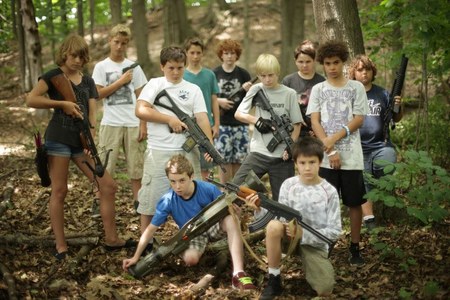 "This is war, not fucking hopscotch!"

I saw this at Fantastic Fest and it was clearly our group's favorite movie of the festival. I DECLARE WAR perfectly captures the joys and pains of being a kid, running wild with imagination, and the awkward transition of "growing up." I was worried that this wouldn't get released wide due to possible knee-jerk reactions on the plot synopsis (especially after Sandy Hook), but there was news recently that Drafthouse Films picked it up for distribution in 2013.

8.  Best Horror Movie:  THE CABIN IN THE WOODS 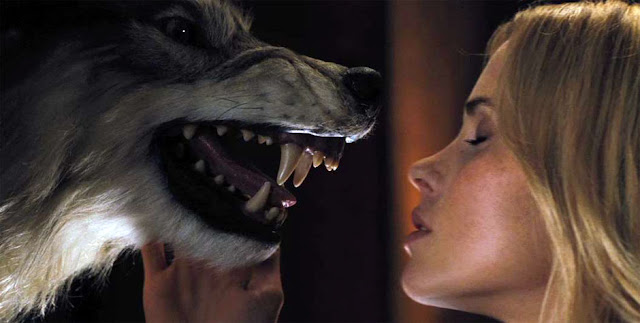 "I have the Harbinger on line two."
"Oh Christ, can you take a message?"

Horror film for horror fans. Seriously, the more horror films (especially from the 80's) you've seen, the more you'll enjoy this gem from Joss Wedon and Drew Goddard. I mean the whiteboard alone is the best gag in the whole movie, and it's shown for about 2 seconds! 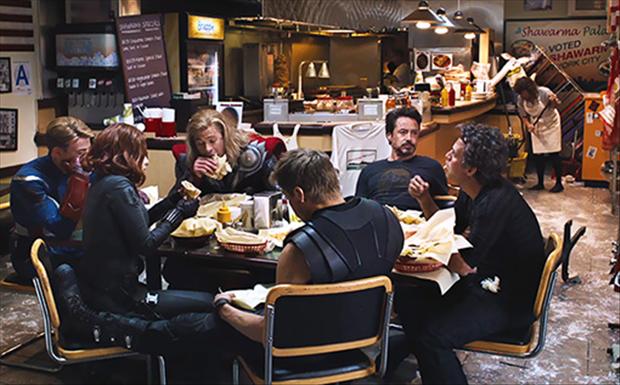 I'm not sure if there's a "right" way to make a movie based on comics, but this feels "right." Comics used to be fun. Sure there was danger, lives were lost, things blew up, but in the end the heroes won and the audience was entertained. THE AVENGERS does this very well. Nobody does ensembles quite like Joss Whedon, but Marvel still took a big chance with him since he was unproven in the movie business, and I think it's safe to say it paid off (to the tune of $1.5 billion). And he figured out how to use the Hulk properly. Let the guy direct whatever he wants, Marvel!

2012 Trend-Watching:  Over 2 hours. Look at all these actors! Joss Whedon finally gets his due. Lowbrow genre done well.

6.  Best Ending to a Trilogy:  THE DARK KNIGHT RISES 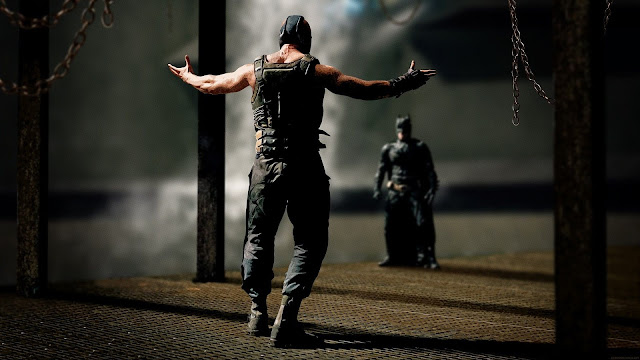 "Come with me. Save yourself. You don't owe these people anymore. You've given them everything."
"Not everything. Not yet."

Yes, I'm a Batman fanboy, and I prefer this over THE AVENGERS. Even though it's not as fun, and it has severe pacing and editing issues, I love this movie. Bane is an awesome villain (until the stupid reveal at the end), Christopher Nolan and his brother Jonathan imbue a strong theme and arc to the whole trilogy through flashbacks and character moments, and the pounding score by Hans Zimmer is excellent. Add to that a surprisingly effective Anne Hathaway as Catwoman, and the always solid Joseph Gordon-Levitt as the successor to the Bat-throne, and you have a damn great Batman movie. That said, I'm ready for someone else to take this franchise in another direction, with Batman being world's greatest detective, not just a ninja with hi-tech weapons. 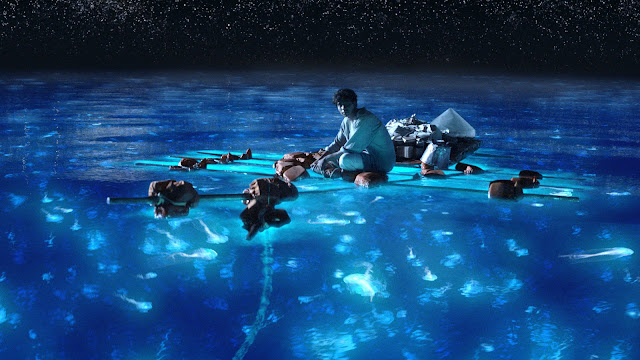 "Thank you Vishnu, for introducing me to Christ."

I haven't read the book that this is based on, and now I feel like I don't have to. Ang Lee conjured up some spectacular visuals, so why bother reading and using my head? I'm kidding kids -- keep reading, mmmkay? 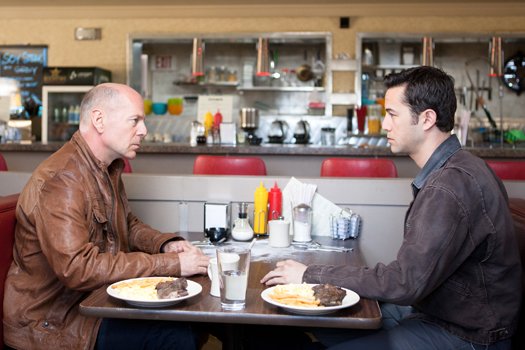 Look, most people came out of LOOPER thinking that it didn't make sense. But think about it, all movies about time-travel don't make any sense. You know why? Because it doesn't exist, Raymond! I just appreciate the fact that an honest-to-God original sci-fi flick was made with some budget (and an R rating to boot). Is Hollywood waking up from its everything-needs-to-be-made-for-teenagers-with-A.D.D. stupor? Nope, we need to thank China.

2012 Trend-Watching:  Time-traveling. Great performance from an actor prone to phoning it in (Bruce Willis, again). The future is bleak. Kids getting violent. Lowbrow genre done well. 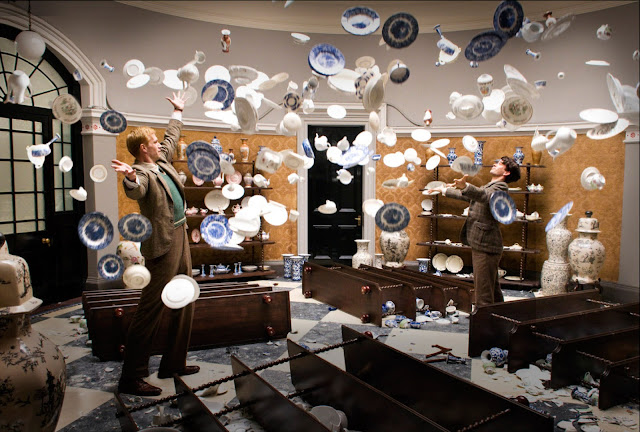 "...no matter what you do, it will never amount to anything more than a single drop in a limitless ocean."
"What is an ocean but a multitude of drops?"

The Wachowskis and Tom Tykwer have outdone themselves and filmed the book that was widely considered impossible to adapt. Six stories in six separate timelines with a group of actors playing multiple roles, all filmed and edited meticulously, and accompanied by great cinematography and a magnificent score... it's moving, poignant, and poetic. An instant-classic that will hopefully be appreciated more as time passes.

2012 Trend-Watching:  Over 2 hours. The future is bleak. Gorgeous visuals. Look at all these actors! 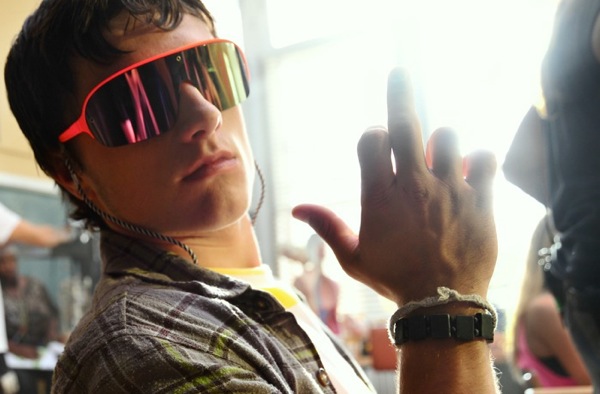 "Well, I am starting my own music site. It's going to list new releases and review albums from bands nobody's heard of except for me and if they have I'll just dismiss them with scathing comparisons to avant-garde folk rockers. Everything's great on a ultra precise 100 point scale and there's no place for feedback. If readers want to bitch about it they'll have to go on their twitters. Good taste is not a democracy."

Now this is truly a movie for the A.D.D. generation. It's impossible for me to do justice to this with my limited vocabulary and intellect. So, just watch it. No, just experience it. It will change your life. Or not.

I haven't seen LINCOLN, but I'm pretty sure DJANGO UNCHAINED is a better movie about slavery. And it has nothing to do with my undying worship of my idol, Quentin Tarantino, no sir. Honest injun. What can I say? He does what he always does. Mashes up genres and make them fresh the only way he can, with well-written dialogue, fascinating characters, and just plain ol' swag. He even made what was ostensibly a pointless and clunky cameo by Franco Nero (the original Django) into a callback joke by the end of the film. Clever girl.

2012 Trend-Watching:  Meta. Over 2 hours. Slavery. Gorgeous visuals. Look at all these actors! Great performance from an actor prone to phoning it in (Samuel L. Jackson). Lowbrow genre done well.
at February 18, 2013