This was probably the worst day, movie-wise, at the festival. It didn't help that I woke up with a wicked sore throat and a runny nose, probably from standing out in the rain the previous night.

We went out for the screening of...

We got to Alamo Lamar around 4:00, for the showing at 4:45. We were told the show was sold out. Keep in mind that, by this point, they were letting the badge holders into shows on average 15-20 minutes prior to the show's start. We were there 45 minutes before it was supposed to start and it was sold out?

We went back to the hotel to kill some time, then came back to Lamar for the screening of...

This was also sold out. Typical. The volunteers were gracious enough to remind us that there were plenty of seats at another screening, which had just started. We said what the hell and went to see...

synopsis: Set among the coalfields of Eastern Kentucky, PASSENGER PIGEONS is a story about dealing with loss and an ambiguous future in the dark hills of Appalachia. The film quietly interweaves four separate story lines over the course of a weekend as the town copes with the death of a local miner.

mini-review: Meh. There isn't much of a story, so the movie is a character piece. The problem is, none of the characters are very interesting. The characters aren't connected in any way, other than the miner's death, and they never interact with each other. So what's the point? The actors were pretty good, I guess. Not the worst movie we saw at the festival. Oh no, that would come next.

We got out of PASSENGER PIGEONS at 8:20. The movie we wanted to see next was set to show at midnight, so we had a lot of time in between. Looking at the schedule, there were only two options, and one of them was watching RED WHITE & BLUE again. Dij wouldn't like that. So we went with the other choice.

synopsis: A film unearthed from the buried landscape of the American nightmare, TRASH HUMPERS follows a small group of elderly 'Peeping Toms' through the shadows and margins of an unfamiliar world. Crudely documented by the participants themselves, we follow the debased and shocking actions of a group of true sociopaths, the likes of which have never been seen before. Inhabiting a world of broken dreams and beyond the limits of morality, they crash against a torn and frayed America. Bordering on an ode to vandalism, it is a new type of horror - palpable and raw.

mini-review: Worst film I've ever seen. Absolutely wasted an hour and a half of our lives. It makes JACKASS look like CITIZEN KANE in comparison. Wanna know what Dij said afterwards? "I would rather see ENTER THE VOID again." James, we don't need to have another Worst Movie Night. I've found my champ, and you can't beat this.

We were feeling pretty crummy by this point. We were sick, and we were pissed off. We ran out of the theater and got in line for...

synopsis: Brent, a 17-year-old student grieving after the recent loss of his father, politely declines an invitation to the end of year school dance from Lola, the quietest girl in school. Devastated by the rejection, Lola and her overly protective father kidnap Brent and force him to endure a macabre prom night of their own creation.

mini-review: Oh thank you, Jesus! Thank you Sean Byrne, for saving us from a shitty day of movies. You, and the rest of Australia, rock. Other than KICK-ASS, this was the most entertaining audience experience at the festival. People cheered, gasped, groaned, and winced throughout. Doesn't hurt that the movie is really, really good. I don't think this has US distribution yet, and that's a shame. This would be a great film to see with a group of friends. 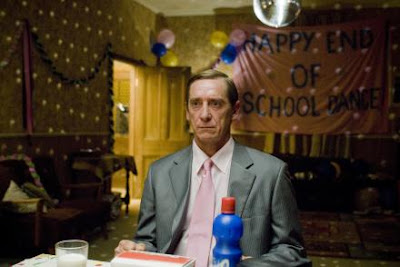 Email ThisBlogThis!Share to TwitterShare to FacebookShare to Pinterest
Labels: I've got a bad feeling about this, movies, SXSW, THE LOVED ONES