We started this day by attending a panel called... 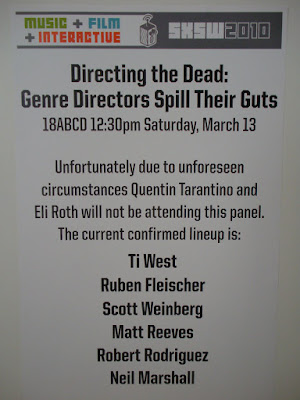 I was very excited until they told us (about 15 minutes before the start of the panel) that for unforeseen circumstances, Quentin Tarantino and Eli Roth were not able to make it. They were to be replaced by Robert Rodriguez and Neil Marshall. Still exciting, but I really wanted to see and hear Tarantino.
The panel itself was really good. Most of the talk was centered on the horror genre, although several non-horror films were mentioned at key points. Scott Weinberg (the moderator), from the website Cinematical, was pretty funny and moved the conversation along at a nice pace, covering a wide range of topics, including the MPAA, remakes, and 3D. 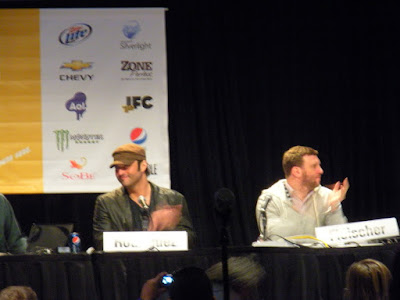 My favorite panelist was Robert Rodriguez, as he had the most interesting things to say (being the most experienced out of that group), and he was clearly the crowd favorite as well. I was also impressed with Ti West, as I have not seen any of his work, but his comments were illuminating in regards to what it's like to be a very low-budget filmmaker at around my age. And I have to mention Matt Reeves, who is currently working on the remake of LET THE RIGHT ONE IN (called LET ME IN). The first time I heard news of the remake, I wrote it off as a quick cash-in to the current vampire craze birthed by the dreadful TWILIGHT movies. But after hearing what he had to say, his approach to the remake (going more into the novel it's based on, and basing part of it on his own childhood), and his reasons on making it in the first place (not for money, but for his love of the story), I'm now sold.

After that, we headed to the screening of...

synopsis: The latest film from Jean-Pierre Jeunet is a magical tale of underdogs battling callous industrial giants with imagination and fantasy reminiscent of Buster Keaton.

mini-review: So very Jeunet. If you liked AMELIE and DELICATESSEN, chances are you'll enjoy the new film from the quirky French director. Handmade gadgets, Rube Goldberg-like reveals of cause-and-effect, color filters, Dominique Pinon... all in a circus version of Paris, as only Jeunet can make it. I loved it, Dij loved it even more. 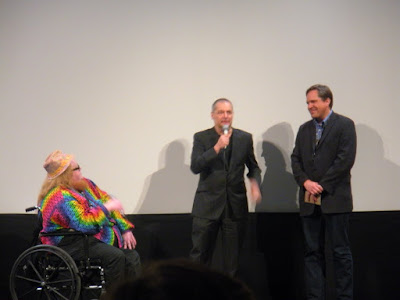 moderator Harry Knowles (from Aintitcool.com), Jean-Pierre Jeunet, Jeunet's translator
things learned at the Q&A:
After that was the screening of CYRUS, but we decided to go across town to the Alamo Drafthouse Lamar for a "super secret" screening of something. Our curiosity had won over. Plus we wanted to experience the Drafthouse, which is considered to be one of the best theaters in the country. 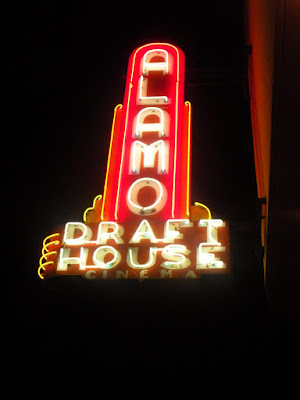 The screening turned out to be...

THE PEOPLE VS. GEORGE LUCAS

synopsis: A no-holds-barred cultural examination of the conflicted dynamic between George Lucas and his fans over the past three decades.

mini-review: This was a small letdown for few reasons. One, they already had a screening of this movie earlier in the day. Why were they giving another screening so soon? Two, this was the "super secret?" Three, the movie itself was well-made, but didn't cover any new ground that any serious STAR WARS fan wasn't aware of. This could've been good and informative maybe 5 or 6 years ago. Dij dozed off several times (she's not a fan). So it's not really for fans, and not really for the non-fans either. Bust.
at March 17, 2010