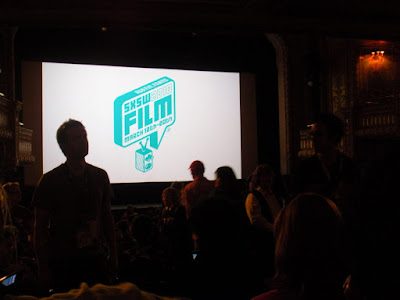 We are finally here. After 22 hours of driving, straight from Santa Ana, we have arrived. And we are in love. With Austin, of course. It reminds me a little of San Francisco, but not as dirty. And people are super friendly here. If you don't hear from us for another week, that's because we decided to stay and live here.

After getting our badges and booklets, we headed to the Paramount Theater for the opening night screening of KICK-ASS. We got there around 4PM, and there was already a line forming for the 7PM show. 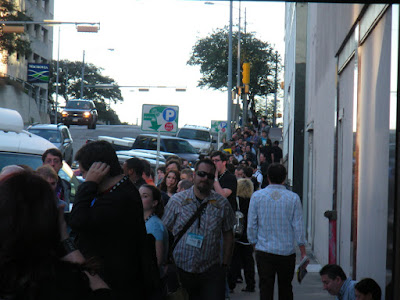 Luckily, the theater seats about 1200 people, so we got in with no problems. Before the movie began, the moderator introduced Matthew Vaughn, the director. He thanked the audience for coming out, and pointed out the cast members that were present: Aaron Johnson (Kick-Ass), Christopher Mintz-Plasse (Red Mist), and Clark Duke (Marty).

So how was the movie? I don't think it's a stretch to say that it truly lives up to its title. It's a great adaptation of the comic book, which is sort of a riff on WATCHMEN (real people with no superpowers dressing up in costumes and fighting crime), but with more fun added to the mix.

Matthew Vaughn continues to impress me, now fully showing off his action skills with several audience-pleasing set pieces (usually involving Hit-Girl, who steals the show whenever she's on the screen). The actors are great across the board, but I have to give a special shout-out to Nicolas Cage for his take on Adam West. It's glorious. And like I said before, Chloe Moretz's Hit-Girl steals the show. She'll be the character that everyone will be talking about as they leave the theater.

Any complaints? Hmm, I thought it was odd that Vaughn used two pieces of music from 28 DAYS LATER and SUNSHINE for a couple of scenes. I'm not against using music from other movies (Tarantino does it all the time), but those movies aren't that old so it was a little jarring to hear them. This was supposed to be the final print, but that made it almost seem like a workprint.

All in all, it's a very entertaining comic book movie. You just have to remember it's rated R for a reason.

After the credits rolled, the director and the cast came out to do a Q&A. 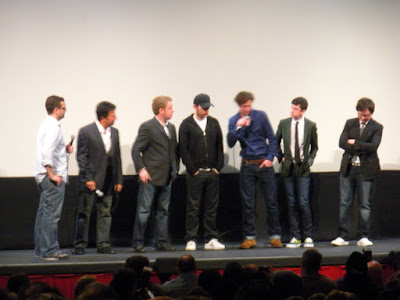 Some things that we learned at the Q&A:
We wanted to catch another movie afterwards, but we were too exhausted from the long drive. We will need to rest up for Day 2.
at March 15, 2010