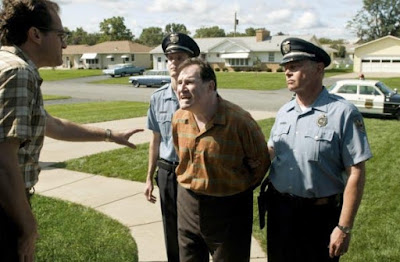 I went from hating this film to liking it to kinda loving it in the span of a week. I couldn't stand most of the characters and some of the scenes were excruciating to sit through (not because of the content, but because it just really sucks to be Larry Gopnik), but the more I think about the movie, the more it grows on me. And man, that ending. If you couldn't stand the ending to NO COUNTRY FOR OLD MEN, this one will give you an aneurysm.
9. WORLD'S GREATEST DAD 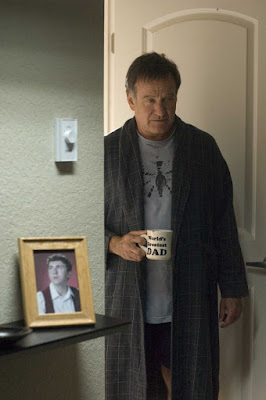 Out of all the different genres and sub-genres of movies out there, I think black comedies are the ones that divide audiences the most. It takes a very special type of person (i.e. sociopaths) to appreciate the subtle, underlying beauty of a good black comedy, which usually results in box office failure. So when one cracks through the system, it's cause for celebration for weirdos like myself. Today I celebrate you, Robin Williams, for showing me that you still got it in you. What "it?" Oh you know, the willingness to actually read the script and be in a good movie, that "it."
8. THE BROTHERS BLOOM 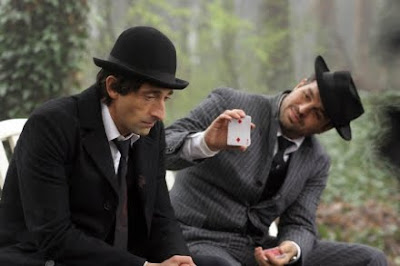 Rian Johnson: "What's a sophomore slump?"
Richard Kelly: "It's when the second effort of a person, say a film director, fails to live up to the standards of their first effort."
Rian Johnson: "Who are you?"
Everyone: "Oh snap!"
7. THE HURT LOCKER 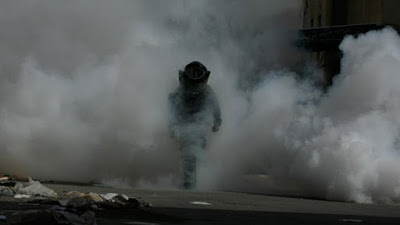 "Intense" is the first and last word that comes to mind in regards to this film. I love that it's unlike other war movies, and doesn't succumb to the standard trappings of action movies either. It's gritty, it's unpredictable, and it's expertly put-together. If Kathryn Bigelow doesn't get the Best Director Oscar over James Cameron (her ex-husband!), I'll be crushed.
6. UP 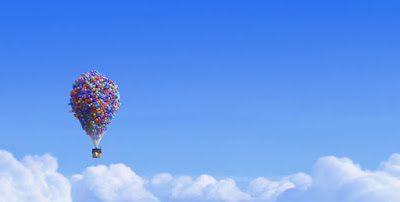 Best Pixar movie since THE INCREDIBLES. If you're not verklempt by the first 10 minutes of the movie, you're probably a zombie.
5. MOON 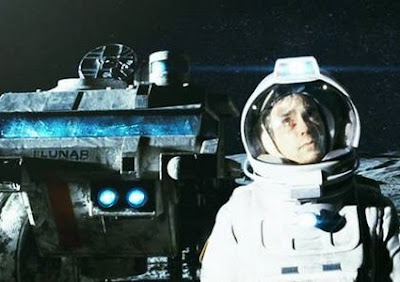 They don't make 'em like this anymore. With around 5 million dollars, Duncan Jones showed what can be done without a Hollywood budget -- a smart film without alienating the audience. It feels like it was made in the 70's, and that's a good thing. Who woulda thunk that David Bowie's son would turn out to be such a talented director? Okay, he's only made one film so I'll wait until I see his next one before I sound like an idiot in hindsight (see: Richard Kelly). And how good is Sam Rockwell? It's a travesty that he wasn't even nominated for the Best Actor Oscar.
4. FANTASTIC MR. FOX 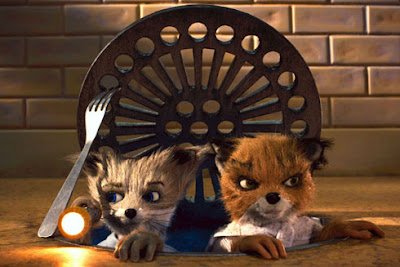 Best Wes Anderson film since RUSHMORE. Yes, it's that good. I was expecting the worst when I heard about the animators complaining about Anderson's directing methods, but everything in this film works. The stop-motion animation, the voices, the music, the characters, and even the adjustments made to the story to fit Anderson's vision (yet another boy with father issues)... they all work. He needs to make more of these. Someone give him more children's books!
3. DISTRICT 9 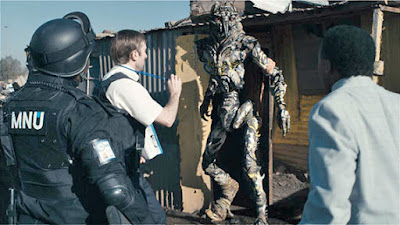 There's brainy sci-fi, and then there's action sci-fi. This falls somewhere in the middle. And with a 30 million dollar budget, it absolutely trounces AVATAR in every category except 3D. Can you picture the faces of the idiots at Microsoft that cancelled the Halo movie after they saw this? Bring on DISTRICT 10, Neill!
2. WATCHMEN

I still can't believe this exists. And that it's good. Yes, I know it has flaws. What movie doesn't? Yes, I know it's not like other comic book movies. That's the point. People who were expecting another SPIDER-MAN or another X-MEN got what they deserved. Do a little research before you shell out your money on movies you know nothing about. The rest of us pretentious assholes with elitist attitudes will enjoy this small victory over typically dumb Hollywood movies. That said, I miss the squid.
1. INGLOURIOUS BASTERDS 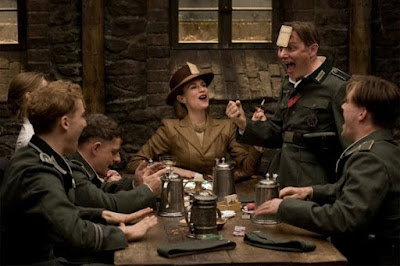 Possibly the best Tarantino film so far. I have to give it some more viewings before I officially declare it, though. I love every single frame of this movie. I love Christoph Waltz, who will hopefully walk away with a Best Supporting Actor Oscar. I love the giant face. I love Hitler's death. I love the game they play in the pub. I love Brad Pitt's butchery of the Italian language. I love that this movie basically does what THE HURT LOCKER does without bombs but with dialogue. I love the final line of the movie. I love you Quentin, see you in SXSW.
SPECIAL RECOGNITION
Best Black Comedy (after WORLD'S GREATEST DAD): OBSERVE AND REPORT
Best Dramedy: UP IN THE AIR
Best Documentary: THE COVE
Best Vampire Flick: THIRST
Best Movie That Deserves a Sequel: ZOMBIELAND
Best Movie to Replace SAW On Every Halloween: TRICK 'R TREAT
Best Surprisingly Good Movie: TAKEN
Best Cameo: ZOMBIELAND (I won't disclose who it is for those that haven't seen it.)
Best Montage: UP

Best Use of Music/Song: Cheap Trick's "I Want You to Want Me" in RUDO Y CURSI

Best Comeback: Sam Raimi for his return to horror with DRAG ME TO HELL
Best Use of Foul Language: IN THE LOOP

Best Quote: "Difficult, difficult, lemon difficult." from IN THE LOOP
at February 16, 2010 3 comments: