Yes, it's finally here. The list everybody and their mom have been waiting for. What took you so long, you ask? Well (a) I've been preoccupied with other things, mostly work. (b) I wanted to catch a few movies that just came out on DVD that were eligible for the list. (c) But mostly I've just been lazy.

Let's get to it then.

10. SHOOT 'EM UP
written (I use the term loosely) and directed by Michael Davis 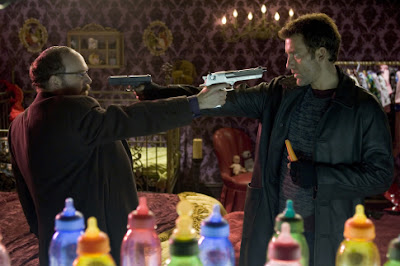 As a live-action Looney Toons movie starring Clive Owen as pissed-off Bugs Bunny (yes, he's holding a carrot in the picture) and Paul Giamatti as brainier Elmer Fudd, this action flick entertained me solid for 86 minutes. I expected nothing more, and nothing less. That Clive, he's so hot right now.

9. ONCE
written and directed by John Carney 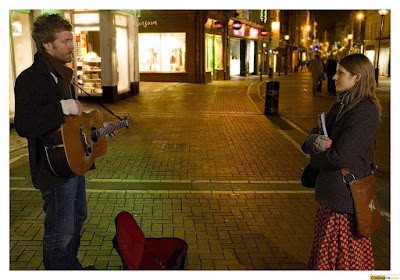 Not a traditional musical, but a musical nonetheless. And a great one, at that. I can't wait for the threequel, featuring the band Thrice. 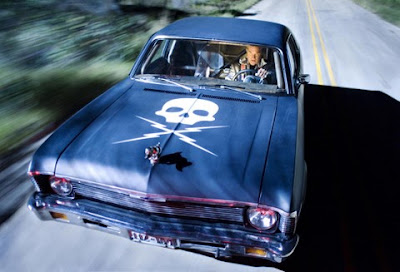 Probably the most fun I had in a movie theater this year. I prefer watching movies in the privacy of my own home, without worrying about little kids crying and cell phones going off every 5 minutes. (Nevermind the fact that 99% of the general movie-going public is made up of douchebags.) But some movies are meant to be experienced on the big screen with a large audience, and this was one (or two) of them. I'm still waiting for the proper DVD release with both features and fake trailers so I can experience it again the way it was meant to be.

7. ZODIAC
directed by David Fincher
written by James Vanderbilt, based on the novel by Robert Graysmith

Another serial killer masterpiece by David Fincher, this one based on the true story of the "Zodiac killer" that terrorized the citizens of San Francisco in the 70's. It's actually more about the people that investigated Zodiac case than the killer himself. And since you should have already known that the killer was never caught (real-life spoiler), you're more drawn to the story behind the investigators, their methods and motivations. It's a frustrating story to watch, but it's told with such elegance and confidence, by whom I consider one of the best directors working today. 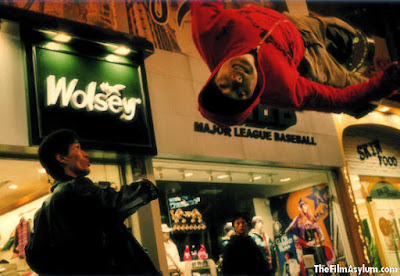 A fun martial arts flick from Korea(?!) I know, we're living in the golden age. Enjoy it while it lasts. The main star of the movie is Doo-hong Jung, who made a name for himself as a stuntman and stunt coordinator, and this was his first starring role (he's mainly had small roles, usually as the strong, silent badass). He says he's getting too old for this stuff, but I would love to see him go up against someone like Jet Li in a movie. One can only dream. 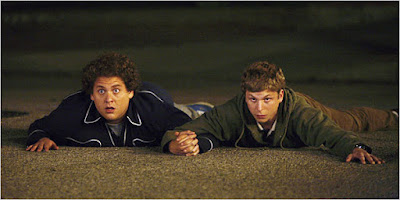 Funniest movie of the year. Sorry Diablo Cody, I actually think this movie had more clever lines and better dialogue than Juno (which has been universally lauded as the funniest and best written screenplay of 2007). Now it's up to debate which of those lines were actually written and which were ad-libbed by Jonah Hill and Michael Cera, but that doesn't really matter to me, funny is funny.

What more can be said about this movie that hasn't already been said? I don't personally know anyone who didn't like this. Even if you didn't care for the story or the characters, you gotta admit it sure looked pretty. It's kinda weird saying that about a movie filled with almost-naked guys, but I'm okay with it if you are.

3. BOURNE ULTIMATUM
directed by Paul Greengrass
written by Tony Gilroy, Scott Z. Burns, George Nolfi, based on the novel by Robert Ludlum (but not really)

In a summer of disappointing threequels (i.e. Shrek 3, Rush Hour 3, Pirates of the Caribbean: At World's End), one stood out among the pack. Jason Bourne singlehandedly saved the summer movie season. And guess what: it's the best threequel. EVAR. There's no contest. Except maybe Return of the King. A satisfying conclusion (if this is the end, like Matt Damon says) to the best spy/espionage action series so far.

2. THE ASSASSINATION OF JESSE JAMES BY THE COWARD ROBERT FORD
written and directed by Andrew Dominik, based on the novel by Ron Hansen 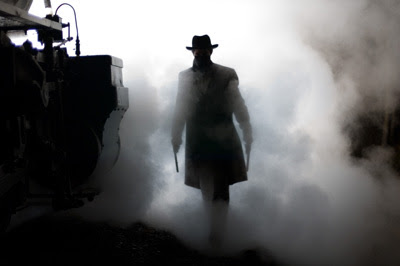 Holy mackerel, that Casey Affleck is somethin', ain't he? He's had a phenomenal year: he was the best thing about Ocean's 13; he was in two very well-reviewed movies, one of which was directed by his older brother, Ben; and he stole this movie right under from Brad Pitt. If he's not nominated for an Oscar, there will be blood.*

1. NO COUNTRY FOR OLD MEN
written and directed by the Coen brothers (Ethan and Joel), based on the novel by Cormac McCarthy 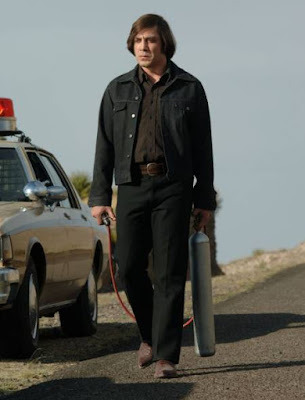 *Which I'm still unsure about. I'm more in the "admire it, but don't love it" camp about that movie. I think it's well-made, Daniel Day-Lewis is amazing as usual, the score is bizarre but fitting, yada yada, but I just didn't get into the story. I'll need to watch it again.


worst movies of 2007:
AQUA TEEN HUNGER FORCE COLON MOVIE FILM FOR THEATERS
THE NUMBER 23 (I only saw the second half of this, but it still counts.)
RUSH HOUR 3
at January 19, 2008