The beginning isn't very exciting, but wait 'til he really gets going.

This week suuuuuuuucked. Glad it's finally over. Even our biweekly TGIF-hour didn't make it less excruciating. 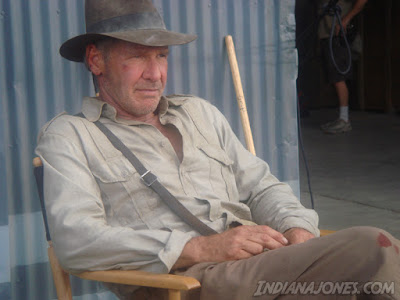 He might as well be sitting on a wheelchair. Nevertheless, I'm still damn excited that another Indiana Jones flick is gonna come out. Even if it's 15 years too late.

You can watch the new trailer for The Simpsons Movie here. It actually looks pretty funny. Mind you, I haven't seen an episode of The Simpsons in years. I think the last "new" episode I saw was the one with Mel Gibson producing a very violent remake of Mr. Smith Goes to Washington.

Latest news on the next Batman:
So we have the Joker, Two-Face (before he becomes Two-Face), Scarecrow, and possibly the Riddler. Those are just the villains. There are also a bunch of minor characters like the aforementioned girlfriend, Gordon (Gary Oldman), Lucious Fox (Morgan Freeman), Alfred (Michael Caine), and yada yada yada. That's a lot of people, and it's making me nervous. Don't let me down, Nolan.