Guitar Hero 3, this time with a dash of WEEZER:

Street Fighter 2, the first-one-without-all-the-crazy-super-turbo-alpha-remix-subtitles edition. You've heard about Guile's "handcuffs" and the "touch of death", now you can finally see it in action.

Before anything else, here's Heath Ledger as the Joker: 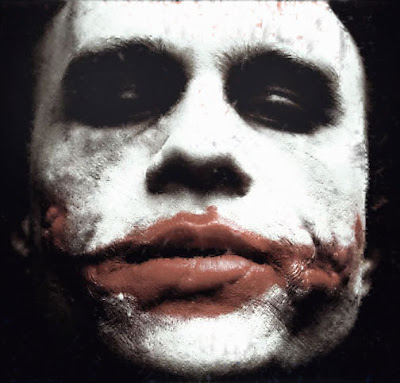 What do I think? Not quite sure. It's definitely different. I'll probably grow to like it. It definitely gives off a Ichi the Killer vibe.

It was cold. Very cold. And packed with tourists. And bums. Bums that blatantly asked for money to buy beer.

The aquarium was pretty damn amazing. You can see some pictures of it at Di's xanga.

We were walking along Fishermen's Wharf when Di pointed out a gallery. With the word "Dali" on the window. Oh EFF yes. I finally got to see some of his work after so many years (I honestly can't remember how old I was when I saw his paintings for the first time at Long Beach. Probably in high school.) and they were So. Damn. Good. The curator (is that what they're called?) was cool enough to let me take some pictures, so here they are:

and there's a few bored faces at the back
all wishing they weren't there
at May 29, 2007 No comments:

We're off to SF. Thanks for not coming, bastards. Before I depart, I leave you with this:

Email ThisBlogThis!Share to TwitterShare to FacebookShare to Pinterest
Labels: amazing-but-sad, go outside once in a while, road trip, San Francisco

Excuse me while I go change my pants.

I'm not exactly the biggest Halo fanboy, but dammit, I'm excited for 3 after watching that. I bet Pablo just soiled his pants. Didn'tcha, Pablo?

My last appointment today was a little old lady that had a problem with her computer not turning on. It was at least 7 years old. It was an IBM PC, with an Intel Celeron 533mhz processor with 64MB of RAM. It had Windows 98. I worked on it for 20 minutes. I called the office, they told me to give up - not worth the trouble of trying to fix such an ancient relic. I had to charge the lady $75. She gave me a $5 tip. Does that make any sense?

Check it out, it's Michael Bay's blog. You can see some high res pictures of the robots from the upcoming Transformers movie. I still don't like "teh ghey" flames on Optimus, but the others are looking pretty damn great. And if you read the post from 4/27/2007 (scroll down on his blog), he says that movie got the highest test screening scores in his career. Maybe it's actually good?

I was just thinking last week, "whatever happened to Travis" while running a AVG scan for the 847th time on some yuppie's virus-infected computer. Turns out, they released a new album. Yesterday. Huh. Okay.

Whatever happened to going to film school?

Everything is bigger in IMAX

There's something different about you, Hermione. I just can't put my finger on it...

Okay, that was horrible. I apologize.

The kitchen part was the best.

It's official: the Lakers are out. See you next season, Kobes. If you get KG to play with you, I may actually start cheering for your team.

I'm buying the tickets for Spider-man 3 in IMAX today so if you're interested, you better tell me now.
at May 03, 2007 No comments: